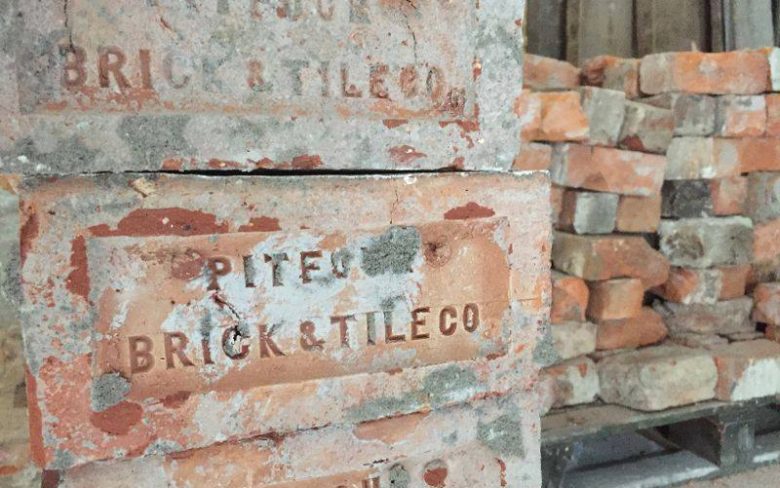 Here at Flour Mill Dundee we leave no brick unturned when it comes to researching stories regarding our building’s past- quite literally!

In a previous blog we shared our findings surrounding branded Pitfour bricks that were discovered during the Flour Mill renovations.  Since then we have discovered a second type of brick, branded Dewar, that was also used in the later alterations of the Mill. Naturally we did some digging to find out more…

Dewar and Finlay Ltd or Drumpark Brickworks operated from 1895 to 1977, producing high quality pressed red facings. The works was originally know as Drumpark Brickworks until the business was taken over by Dewar and Findlay in 1919.  Based in Glasgow, it was one of the few Scottish brickworks at the time that made plastic-clay facings. As a result it had a particularly unusual array of kilns and machinery.

It has been noted that the Dewar bricks were also used in the viaduct at Tarrasfoot on the Longholm branch of the North British Railway in Dumfries and Galloway. The branch opened on 18th April 1864, and closed to regular passenger traffic on 15th June 1964.

However as with most things, this brickworks faced its challenges over the years. Newspaper clippings from 1949 and 1954 suggest that the brickwork had multiple issues with employees stealing coal.  So much so it was feared to endanger production:

“Airdrie and Coatbridge Advertiser – Many thefts of coal have been taking place at the Drumpark Brickworks of Dewar and Finlay Limited, Bargeddie and Police have arrested several persons some of whom have already been prosecuted. ….. The principal offenders, it is stated, are women and children.” (1954)

Dewar and Finlay Ltd eventually closed its doors and was sold in May 1977.

These mysterious bricks have been spotted in various places throughout Scotland and can still be seen in situ at the now demolished viaduct- and let’s not forget right here in the heart of Dundee.